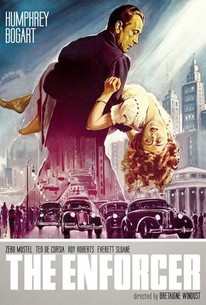 Humphrey Bogart plays Martin Ferguson, a prosecutor about to put Albert Mendoza (Everett Sloane), the head of a murder-for-hire ring, on trial. But the night before the trial, his key witness, Joe Rico (Ted de Corsia), dies in a fall out of the window of the room in which he's been guarded, part of an abortive escape attempt to keep from testifying. His case in shambles, Ferguson and detective Captain Nelson (Roy Roberts) try to piece the entire four-year investigation back together from square one, trying to find something that might give them another way to prosecute Mendoza. The main body of the movie is told in flashback, starting when a small-time hood named Duke Malloy (Michael Tolan, then billed as Lawrence Tolan) walks into a police station to turn himself in for killing his girlfriend -- and says that someone made him kill her. He babbles to the bewildered detectives about "hits" and "contracts" and men nicknamed Philadelphia, Big Babe, and Smiley. The body isn't found, but they arrest Malloy, who hangs himself in his cell. That dead end leads, almost by accident, to Philadelphia Tom Zaca (Jack Lambert), an asylum inmate who has to be put under sedation at the mention of Malloy's name. They find another suspect's body burning in his building's incinerator, and then Big Babe Lazick (Zero Mostel), a two-bit hood, hiding in a church in mortal fear of his life. He begins weaving a tale of a murder-by-contract ring and its head operator, Joe Rico, of a murder contract that Duke Malloy never filled on a girl who had to change her name, of mistaken identity and the murder of the girl's cab-driver father, and the connection between that and a murder that they both witnessed eight years earlier. In the midst of all of those interlocking stories (spread across ten years), there's something Ferguson missed -- when he had Rico to testify -- that he has to sort out from the reams of testimony and evidence, and he has to figure it out before Mendoza does, or lose the last witness he has. ~ Bruce Eder, Rovi

Mario Siletti
as Louis the Barber

Karen Kester
as Nina as a child

Eula Guy
as Landlady
View All

Critic Reviews for The Enforcer

Audience Reviews for The Enforcer