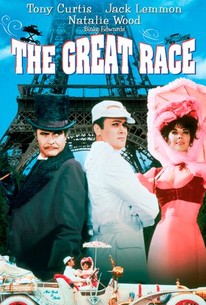 Tony Curtis stars as The Great Leslie, a hero among heroes whose purity of heart is manifested by his spotlessly white wardrobe. Leslie's great rival, played by Jack Lemmon, is Professor Fate, a scowling, mustachioed, top-hatted, black-garbed villain. Long envious of Leslie's record-setting accomplishments with airships and sea craft, Professor Fate schemes to win a 22,000-mile auto race from New York City to Paris by whatever insidious means possible. The problem is that Fate is his own worst enemy: each of his plans to remove Leslie from the running (and from the face of the earth) backfires. Leslie's own cross to bear is suffragette Maggie Dubois (Natalie Wood), who also hopes to win the contest and thus strike a blow for feminism. The race takes all three contestants to the Wild West, the frozen wastes of Alaska, and, in the longest sequence, the mythical European kingdom of Carpania. This last-named country is the setting for a wild Prisoner of Zenda spoof involving Professor Fate and his look-alike, the foppish Carpanian king. When Leslie and Fate approach the finish line at the Eiffel Tower, Leslie deliberately loses to prove his love for Maggie. Professor Fate cannot stand winning under these circumstances, thus he demands that he and Leslie race back to New York. The supporting cast includes Peter Falk as Fate's long-suffering flunkey Max, Keenan Wynn as Leslie's faithful general factotum, Dorothy Provine as a brassy saloon singer, Larry Storch as ill-tempered bandit Texas Jack, and Ross Martin as Baron Von Stuppe. The film also yielded a hit song, Henry Mancini and Johnny Mercer's The Sweetheart Tree. The Great Race was dedicated to "Mr. Laurel and Mr. Hardy".

Tony Curtis
as The Great Leslie

Hal Smith
as Mayor of Boracho

Maria Schroeder
as Woman in Tobelsk

Hal Riddle
as Baker
View All

Critic Reviews for The Great Race

Audience Reviews for The Great Race