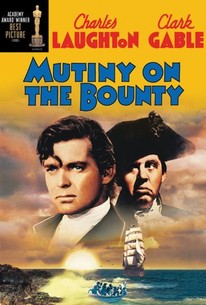 Mutiny on the Bounty

The historical inaccuracies in this high-seas adventure are more than offset by its timeless themes, larger-than-life performances from Clark Gable and Charles Laughton, and Frank Lloyd's superb direction.

Mutiny on the Bounty Photos

The 1932 publication of Charles Nordhoff and James Norton Hall's Mutiny on the Bounty sparked a revival of interest in the titular 1789 ship mutiny, and this 1935 MGM movie version won the Oscar for Best Picture. Clark Gable stars as Fletcher Christian, first mate of the infamous HMS Bounty, skippered by Captain William Bligh (Charles Laughton), the cruelest taskmaster on the Seven Seas. Bligh's villainy knows no bounds: he is even willing to flog a dead man if it will strengthen his hold over the crew. Christian despises Bligh and is sailing on the Bounty under protest. During the journey back to England, Bligh's cruelties become more than Christian can bear; and after the captain indirectly causes the death of the ship's doctor, the crew stages a mutiny, with Christian in charge. Bligh and a handful of officers loyal to him are set adrift in an open boat. Through sheer force of will, he guides the tiny vessel on a 49-day, 4000-mile journey to the Dutch East Indies without losing a man. Historians differ on whether Captain Bligh was truly such a monster or Christian such a paragon of virtue (some believe that the mutiny was largely inspired by Christian's lust for the Tahitian girls). The movie struck gold at the box office, and, in addition to the Best Picture Oscar, Gable, Laughton, and Franchot Tone as one of the Bounty's crew were all nominated for Best Actor (they all lost to Victor McLaglan in The Informer). The film was remade in 1962 and adapted into the "revisionist" 1984 feature The Bounty with Mel Gibson as Fletcher Christian and Anthony Hopkins as Captain Bligh. ~ Hal Erickson, Rovi

Eric Wilton
as Captain of Board

Will Stanton
as Portsmouth Joe

Harry Cording
as Soldier
View All

News & Interviews for Mutiny on the Bounty

Critic Reviews for Mutiny on the Bounty

Audience Reviews for Mutiny on the Bounty

Mutiny on the Bounty Quotes