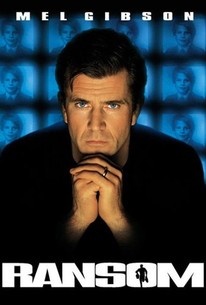 Directed with propulsive intensity by Ron Howard, Ransom is a fiery thriller packed with hot-blooded performances and jolting twists.

Ron Howard directed this thriller which stars Mel Gibson as Tom Mullen, a former fighter pilot who built a ramshackle one-plane airline into a major multinational service fleet. Mullen has a multi-million dollar fortune, a beautiful wife, Kate (Rene Russo) and a nine-year-old son, Sean (Brawley Nolte) that he dotes on. However, Mullen's life comes crashing down around him when Sean is kidnapped. The FBI are called in, but Mullen is wary -- he was the recent target of an FBI investigation in which he was found to have bribed union officials while negotiating a contract. FBI Agent Hawkins (Delroy Lindo) advises Mullen to make the $2 million dollar drop to pay the kidnappers, which will make it easier to track the criminals, but when the tradeoff goes wrong, Mullen takes a new tactic -- he goes on television and offers a $2 million bounty for the heads of the people who kidnapped his child. Meanwhile, it becomes clear the kidnappers include Maris Connor (Lili Taylor), who once worked for the Mullens, and Jimmy Shaker (Gary Sinise), one of the cops who investigated Mullen for bribery. This remake of the 1956 Glenn Ford vehicle of the same name was scripted by Richard Price, who has a bit part as a police detective.

Mike Hodge
as Man at Party

Louisa Marie
as Woman at Party

Daniel May Wong
as Agent Sam

James Georgiades
as Cop No. 3

Christian Maelen
as Cop No. 4

David Vadim
as Cop No. 5

Richard Price
as Detective No. 1

Teodorina Bello
as Woman on Street No. 1

Jane Jenkins
as Woman on Street No. 2

Lori Tan Chinn
as Woman on Street No. 3

Carl Don
as Man on Street No. 1

Nathaniel Freeman
as Man on Street No. 2

Phil Parolisi
as Man on Street No. 3

Rafael Osorio
as Man on Street No. 4

Jeffrey Kaufman
as ND Cop No. 2