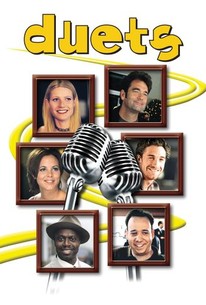 Duets suffers from sloppy direction and stretches credibility. Also, the characters are uninteresting and it's hard to care about what happens to them.

Director Bruce Paltrow teams with his Oscar-winning daughter Gwyneth Paltrow for this road comedy with music. Paltrow plays Liv, a struggling professional singer whose meets her father, Ricky Dean (Huey Lewis), for the first time at the funeral of her mother. As it turns out, both Liv and Ricky supplement the income from few-and-far-between gigs by singing in karaoke contests, and soon father and daughter are competing on the same circuit. Meanwhile, Todd Woods (Paul Giamatti), a salesman who has grown disenchanted with his job, his family, and his life, picks up a hitch-hiker named Reggie Kane (Andre Braugher), and during a stop at a tavern, they discover they make a good duet team while belting out a version of "Try A Little Tenderness." And waitress Suzi Loomis (Maria Bello) sweet talks Billy (Scott Speedman), a cabbie, into driving her to Omaha, where the national karaoke finals will determine who does the best job of singing along with the records, as the lives of these six characters begin to intersect. Duets also features Angie Dickinson as Blair, Liv's grandmother who was once a showgirl in Frank Sinatra's Las Vegas floorshow; Brad Pitt was originally cast in Speedman's role but withdrew after he and Paltrow announced the end of their off-camera relationship.

Carol Alexander
as Beth the Hostess

Warren Takeuchi
as Texas Trooper No. 1

Critical Consensus: "Lady" Is All Wet; "Ex" Is Not Super; "House" Is Scary, "Clerks" Is Funny
Critics Consensus: Zathura‘s Got Game, Get Rich Dies Tryin’
View All