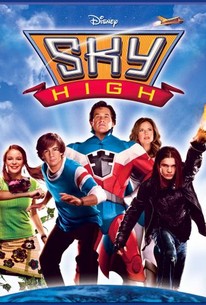 An ordinary teenager finds out he's not so ordinary after all in this comedy-adventure. Will Stronghold (Michael Angarano) has his share of anxieties about starting high school, but once he arrives on campus, he discovers he's attending Sky High, a special learning facility for the children of superheroes. Will realizes his father is actually super-human crime fighter Captain Stronghold (Kurt Russell), while his mom is fellow champion Josie Jetstream (Kelly Preston). However, in Will's first few days at school, Coach Boomer (Bruce Campbell) is unable to discover any superior abilities in him, meaning that instead of joining the school's budding heroes, he's been relegated to the ranks of the lowly sidekicks. In time, Will discovers he happens to have super strength after all, but will he learn to hone his new gifts in time to fend off the bullies at school, get the girl of his dreams, and save his folks from a longtime nemesis? Sky High also features Lynda Carter, Dave Foley, and Kevin McDonald.

Michael Angarano
as Will Stronghold

Will Harris
as Speed

Sky High’s Portrayal of Everyday Superhero Life Was Ahead of Its Time
The Crown, The Emperor’s New Groove, Grosse Pointe Blank, and More Available to Stream on Netflix and Amazon Prime
New Director Lined Up for "Shrek 4"
View All