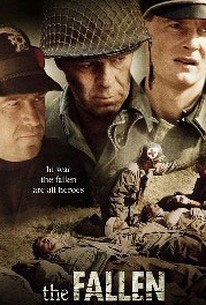 War makes for uneasy alliances and dangerous loyalties in this period military drama. During the waning days of World War II in late 1944, German troops in the Italian Alps are struggling to defend "the Gothic Line," their ultimate line of defense, with the help of a battalion of Italian soldiers as American forces on the other side are poised to attack. While Italy may be allied with Germany in the war, many of the soldiers feel little sympathy for their cause, and the Italian villagers nearby are as frequently in cahoots with Communist resistance fighters as with Yankee soldiers, a number of whom have Italian blood. Lt. Gunther Breukner (Thomas Pohn) leads the German troops, while Lt. Bruno Gianini (Fabio Sartor) commands the Italian reinforcements. Sgt. Ricky Malone (John McVay) is temporarily in charge of a band of American soldiers when a cache of supplies must be escorted to the front lines; Malone and his men must also escort an injured G.I. to a field hospital for medical attention. Sal (John O'Leary), one of the American fighters, is hoping to do some business with Rossini (Carmine Raspaolo), a local black marketer, before they hit the road, as Sal has confiscated some vintage wine he'd like to unload for the right price. En route to the front, Malone's troops are sidelined by the breakdown of their truck and are taken in by an Italian family for the night. While the Yankee G.I.s enjoy the attention of some attractive women from the nearby village, they also make friends with a similarly stranded Scottish officer (Milton Welsch), unaware that he's actually a spy for Axis intelligence. But neither the German agent nor the American soldiers realize the family that has given them shelter is affiliated with the Communist underground. The Fallen was directed by Ari Taub, who screened an earlier version of the film in 2003 under the title "Letters from the Dead."

Fabio Sartor
as Gianini
View All

Critic Reviews for The Fallen

Audience Reviews for The Fallen