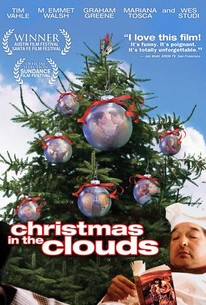 Christmas in the Clouds

An agreeably familiar story with some welcome quirky twists, Christmas in the Clouds offers all the comforting entertainment its title suggests.

Ray (Tim Vahle) has just returned from college to run a Native-American ski lodge. A laid-back place where employees' children play in the lobby and the handyman has a habit of macking on guests, the lodge isn't exactly four-star travel guide material. So when Ray learns that a travel guide representative is coming to make an inspection, he makes an executive decision to make the lodge a professional place of business. In addition to keeping his father, who happens to be the hotel's former manager, out of his way, he also has to contend with his somewhat eccentric staff, which includes an emotional vegetarian chef (Graham Greene) who takes a certain pleasure in informing his diners of the names he has given the animals they're eating. Despite Ray's exhaustive preparations, something, of course, goes wrong: something that, in this case, turns out to be a case of mistaken identity: when Tina, a comely Mohawk woman, shows up at the lodge, Ray assumes her to be the representative, and sets about giving her the royal treatment while the actual representative (M. Emmet Walsh) is ignored and must contend with a hefty dose of hotel mismanagement. Christmas in the Clouds was an audience favorite at the 2002 Philadelphia Festival of World Cinema. ~ Rebecca Flint Marx, Rovi

Millie Chou
as Millie
View All

Critic Reviews for Christmas in the Clouds

Audience Reviews for Christmas in the Clouds

There are no featured audience reviews for Christmas in the Clouds at this time.

Christmas in the Clouds Quotes