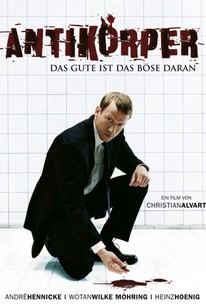 It's derivative and its more ambitious aspirations don't amount to much, but Antibodies remains a reasonably diverting and well-made thriller.

When a notorious German serial killer is captured after committing some of the most heinous acts against humanity ever imaginable, a farmer and police officer from a sleepy rural community on the outskirts of Berlin is drawn into the case as he searches for the answers to a murder that has shaken his tight-knit community in director Christian Alvart's tense psychological nightmare. Gabriel Engel (André Hennicke) is the most depraved kind of predator imaginable. In his brutal and bloody killing spree, Engel has preyed on not only adults, but defenseless young children as well. Now Engel has been captured by the authorities, and the shaken citizens can all breathe a little bit easier. All except for Michael Martens (Wotan Wilke Moehring), that is. It's been a year since young Lucia Flieder was found viciously slain, and the citizens of the community that Martens presides over are growing impatient as they await the capture of her killer. Engel has admitted to 14 murders, but he has staunchly denied any connection to the Flieder case. Nevertheless, he claims to know the identity of the killer. Before he entrusts Martens with the sensitive information, Engel demands that Martens allow him to engage in a total psychological evaluation of his interrogator. With a convicted maniac gradually working his way deep into Martens' fragile psyche, an urban police force who derides the rural lawman as an ineffective incompetent, and a family life that is slowly coming unraveled, the once determined police officer slowly feels himself succumbing to the madness that encircles him with each step closer he gets to realizing the true identity of Flieder's killer.