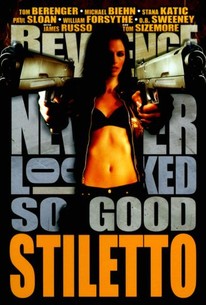 A deadly seductress sets out to avenge her sister, in the process uncovering a dark conspiracy that makes her question everything she's been fighting for in this action thriller featuring Tom Berenger, Tom Sizemore, William Forsythe, and Michael Biehn. Raina (Stana Katic) was deeply in love with powerful crime boss Virgil Vadalos (Berenger) until she discovered that he was involved with her sister's disappearance. After that, their relationship met a violent end. Now Raina is determined to take out Virgil and his entire crew. With nothing more than unbridled fury and a particularly sharp knife, Raina starts at the lower rungs of Virgil's organization and methodically begins moving her way up through the ranks. But Virgil is no sucker, and in order to stop the slaughter he calls on crooked cop Beck (Paul Sloan) to stop Raina no matter what it takes. Now, as the streets of Los Angeles run red with blood, Raina and Beck discover that in this city, there is no escaping the tyranny of the corrupt.

Efrain Figueroa
as Ernesto
View All

There are no critic reviews yet for Stiletto. Keep checking Rotten Tomatoes for updates!