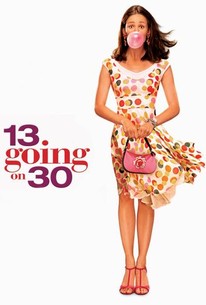 Although the plot leaves a lot to be desired, 13 Going on 30 will tug at your inner teenager's heartstrings thanks in large part to a dazzling performance from Jennifer Garner.

Thirteen-year-old Jenna (Shana Dowdeswell) has had enough with the trials of adolescence. In addition to being saddled with a devoted-but-nerdy best friend, Matt (Sean Marquette), she falls victim to one of the dangers of playing Seven Minutes in Heaven with the coolest kids in school: being stranded without a willing make-out partner. Humiliated, Jenna buries herself in the aforementioned make-out closet, wishing she could skip the whole adolescence bit and move straight into adulthood, and miraculously wakes up just weeks away from her 30th birthday. Of course, a lot has changed since going to bed the night before, not the least of which being an impressive set of womanly curves. The new, older Jenna (Jennifer Garner) is a successful magazine editor with friends in high places and a lion's share of potential suitors -- including a hockey-playing boyfriend and a swarthy married man. The problem is that her mind hasn't matured with her body; Jenna not only finds living on her own more terrifying than cool, but is quick to dismiss any male over the age of 14 as "gross." Half excited, half mortified, Jenna seeks out Matt (Mark Ruffalo), whom she learns she had spurned as a teenager in an effort to join the popular crowd. Gary Winick directed the film, from a script by Josh Goldsmith and Cathy Yuspa; Gina Matthews produced. Choreographer Michael Peters -- who died in 1994 -- received posthumous credit, as his choreography from the Michael Jackson Thriller video is used in one scene. ~ Tracie Cooper, Rovi

Christa B. Allen
as Young Jenna

Caroline A. Rice
as Dancer

Audience Reviews for 13 Going on 30