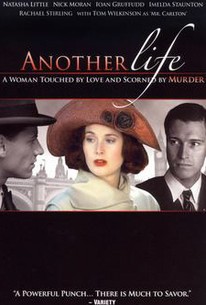 A scandalous murder case that was the talk of England in the 1920s is brought to the screen in this period drama based on fact. In 1913, Edith Graydon (Natasha Little) was a young woman living with her family -- good-natured father (Michael Bertenshaw), emotionally distant mother (Imelda Staunton), and shy younger sister (Rachael Stirling) -- in a fading middle-class neighborhood in London. While not especially bright or ambitious, Edith wanted more out of life than her family's situation would provide, and with this in mind she accepted the marriage proposal of her boyfriend Percy Thompson (Nick Moran). While Percy was a bit better off than Edith's family, he was not an especially interesting or exciting partner, and after several years Edith began to grow restless with their marriage. Long regarded as something of a flirt, in 1921 Edith renewed her friendship with Freddy Bywaters (Ioan Gruffudd), a good-looking and worldly former beau who had just returned to England after serving in the Queen's Navy. Edith and Freddy were not destined to remain just friends for long, and as they began to enter into a passionate affair, Edith began writing a series of letters to her lover in which she confided her ardor for Freddy, her fatigue with Percy -- and her belief that murdering her husband would solve a great many problems. Shot in 1999, Another Life did not receive a theatrical release until 2001, when it arrived in British theaters and earned enthusiastic reviews for Natasha Little's performance as Edith.

Critic Reviews for Another Life

Audience Reviews for Another Life

There are no featured audience reviews for Another Life at this time.