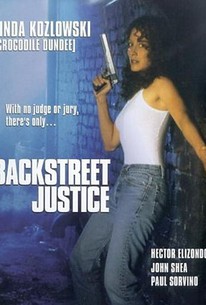 In this complexly-plotted action-packed police drama, Pittsburgh policewoman Keri Finnegan (Linda Kozlowski) returns to her home turf to clean up crime and clear the ruined name of her father, a cop who was wrongfully disgraced and fired from the force. McKees Rocks is one Steeltown's roughest ethnic neighborhoods, and though many residents are impoverished, they have yet to surrender their pride. Keri's father's reputation, plus her gender, make it very difficult for her to do her job. When a serial killer begins slaughtering owners of local property, Keri masquerades as an old woman and is attacked by what appears to be a policeman. He is eventually arrested for killing his wife, but for some reason the cops ignore the other killings. Keri, however, doesn't and thus launches her own investigation. She finds herself opposed at every turn, not only by her lover and fellow-detective Nick Donovan (John Shea), but also by the police chief, Nick's father, and a powerful gangster.

Rocky Bleier
as Himself
View All

There are no critic reviews yet for Backstreet Justice. Keep checking Rotten Tomatoes for updates!

There are no featured audience reviews for Backstreet Justice at this time.