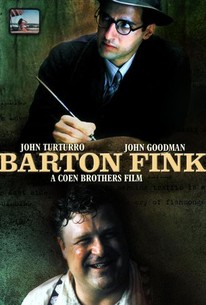 Twisty and unsettling, the Coen brothers' satirical tale of a 1940s playwright struggling with writer's block is packed with their trademark sense of humor and terrific performances from its cast.

The title character, played by John Turturro, is a Broadway playwright, based on Clifford Odets, lured to Hollywood with the promise of untold riches by a boorish studio chieftain (played by Michael Lerner as a combination of Louis B. Mayer and Harry Cohn). Despising the film capital and everything it stands for, Barton Fink comes down with an acute case of writer's block. He is looked after by a secretary (Judy Davis) who has been acting as a ghost writer for an alcoholic screenwriter (John Mahoney, playing a character based on William Faulkner). Also keeping tabs on Fink is a garrulous traveling salesman (John Goodman), the most likeable, stable character in the picture. And then comes the plot twist to end all plot twists, plunging Barton Fink into a surreal nightmare that would make Hieronymus Bosch look like a house painter. Once more, Ethan and Joel Coen serve up a smorgasbord of quirkiness and kinkiness, where nothing is what it seems and nothing turns out as planned. ~ Hal Erickson, Rovi

Barry Sonnenfeld
as Page Calling for Barton Fink
View All