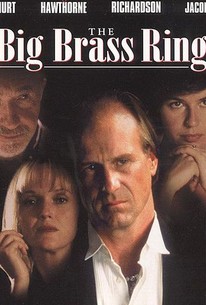 An unproduced screenplay written by the late Orson Welles (penned in collaboration with actress Oja Kodar, Welles' significant other in his later years) forms the basis of this drama of political gamesmanship and blackmail. Blake Pellarin (William Hurt) is running for governor of Missouri in a close race going into its final week when a figure from his past reappears. Kim Mennaker (Nigel Hawthorne) was Pellarin's one-time mentor and father figure (after Blake's dad died in the Korean war) who left the United States when public disclosure of his homosexuality ended his political career. This visit from an old friend soon proves less then welcome; when Pellarin was a teenager, he participated in a photo session organized by Mennaker in which he was snapped in sexually compromising positions with both a woman and a man. These photos could put a stake through the heart of Pellarin's life in politics, and Mennaker soon makes clear this is hardly the only dirt he has on Blake. Mennaker also has a ready audience for his stories -- Cela Brandini (Irene Jacob), a European reporter looking for scandal, even though she's having an affair with Pellarin. When Pellarin's wife (Miranda Richardson) and bodyguard (Ewan Stewart) get wind of Blake's indiscretions, his candidacy becomes a disaster waiting to happen. Director George Hickenlooper adapted Welles and Kodar's screenplay with critic F.X. Feeney; among his previous credits, Hickenlooper directed the short film Some Folks Call It A Sling Blade, a short film later expanded by Billy Bob Thornton into his award-winning feature Sling Blade.

There are no featured audience reviews for The Big Brass Ring at this time.