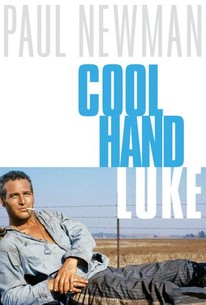 Though hampered by Stuart Rosenberg's direction, Cool Hand Luke is held aloft by a stellar script and one of Paul Newman's most indelible performances.

Paul Newman was nominated for an Oscar and George Kennedy received one for his work in this allegorical prison drama. Luke Jackson (Paul Newman) is sentenced to a stretch on a southern chain gang after he's arrested for drunkenly decapitating parking meters. While the avowed ambition of the captain (Strother Martin) is for each prisoner to "get their mind right," it soon becomes obvious that Luke is not about to kowtow to anybody. When challenged to a fistfight by fellow inmate Dragline (George Kennedy), Luke simply refuses to give up, even though he's brutally beaten. Luke knows how to win at poker, even with bad cards, by using his smarts and playing it cool. Luke also figures out a way for the men to get their work done in half the usual time, giving them the afternoon off. Finally, when Luke finds out his mother has died, he plots his escape; when he's caught, he simply escapes again. Soon, Luke becomes a symbol of hope and resilience to the other men in the prison camp -- and a symbol of rebelliousness that must be stamped out to the guards and the captain. Along with stellar performances by Newman, Kennedy, and Martin, Cool Hand Luke features a superb supporting cast, including Ralph Waite, Harry Dean Stanton, Dennis Hopper, Wayne Rogers, and Joe Don Baker as members of the chain gang.

Joy Harmon
as The Girl