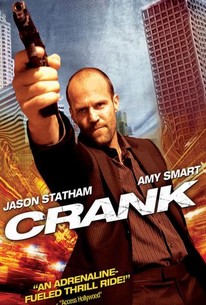 Crank's assaultive style and gleeful depravity may turn off casual action fans, but audiences seeking a strong dose of adrenaline will be thrilled by Jason Statham's raucous race against mortality.

A one-time freelance hitman who was just attempting to turn his life around is forced to keep his heart pumping when his vengeful former employers inject him with a lethal poison that will permanently stop his ticker if his pulse sinks beneath an active rate in a non-stop urban action extravaganza starring Jason Statham and Amy Smart. Chev Chelios (Statham) was one of the most skilled assassins in the West Coast crime syndicate. When he hung up his guns in the middle of a job to run off with his new girlfriend Eve (Smart), however, the man who was once the hunter now becomes the hunted. Awakened from his slumber by a telephone call informing him of his precarious situation, Chelios soon discovers that the only way to save Eve from certain death at the hands of his nemesis is to stay two steps ahead of his killers, keep his heart-rate high enough to stay alive, and blast through the streets of Los Angeles in search of an antidote. ~ Jason Buchanan, Rovi

Laurent Schwaar
as Man in Garage

Med Abrous
as Verona Crew No. 1

Daniel Stevens
as Verona Crew No. 2

Wally Lozano
as Verona Crew No. 3

Sam Witwer
as Shootout Henchman No. 1

Jai Stefan
as Shootout Henchman No. 2