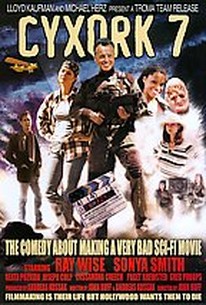 Mother Nature's fury clashes with Hollywood has-been determination as a group of down and out filmmakers attempt to resurrect a dying sci-fi franchise by keeping their production afloat long enough to shoot their big climax with the "Big One" as the backdrop. In just seventy-two hours, Los Angeles will finally get the earthquake that folks have been anticipating for decades. The Generic News Network is capitalizing on public panic in typically tacky fashion, and the cast of the hopelessly irrelevant Cyxork sci-fi film franchise is ready to risk their lives for some free special effects. But while square-jawed star Rex Anderson (Ray Wise) just wants to keep his film career afloat and earn enough money so that he and his wife can move out of the public appearance bus they call a home, director Angela LaSalle (Sonya Smith) is seeking to transform schlock cinema into celluloid art. When Rex goes over Angela's head in an attempt to get her fired, the plan backfires and they both end up out of work. The production effectively shut down, Rex and Angela decide that their only hope is to put aside their differences, pretend they are still in production, and work under the radar to finish the film. But who would be foolish enough to try and shoot a film during what promises to be the biggest earthquake in recorded history? As the crew races to get the film finished before the studio finds out, the entire state of California braces for the big rumble and hopes for the best.

Brad Vickery
as Bobby
View All

There are no featured audience reviews for Cyxork 7 at this time.