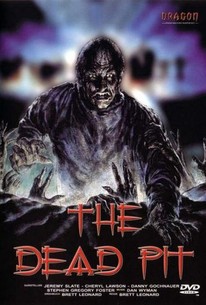 Zombies rise up from a terrifying pit beneath a notorious mental asylum to do the bidding of the evil Dr. Ramzi, the crazed doctor who twenty years before was walled up alive in the crazy house after someone discovered his horrific experiments involving formaldehyde and illegal lobotomies. Following each experiment, the doctor would casually toss the dead victims into the pit. While his captor slowly bricks him up, Ramzi swears that he will have revenge. When enigmatic Jane Doe is admitted into the asylum for severe amnesia and she turns out to have amazing subconscious psychic power that wakens Ramzi from his hellish sleep, he gets his revenge. Jane and Ramzi seem to be psychically linked and he draws his power from her as he begins to resurrect his former victims. He then sends his small zombie army out into the hospital to find new recruits. Gory, creative killing occurs, for Ramzi's zombies are not only quick, they are also semi-intelligent. Now only Jane, the doctor who originally killed Ramzi, a psychotic demolitions expert and a lunatic zombified nun can stop them.

Critic Reviews for The Dead Pit

Audience Reviews for The Dead Pit