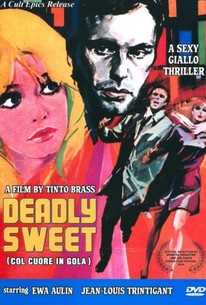 Col Cuore in Gola (Deadly Sweet) (I Am What I Am)

This Italian-French co-production weds the giallo thriller with pop hipness in a manner akin to Blow-Up, but comes across as a less-inspired variant on the same year's La Morte Ha Fatto l'Uovo. Like that film, Col Cuore in Gola stars Jean-Louis Trintignant and Ewa Aulin in a loud, deranged thriller with hallucinatory visuals, irritating music, and plentiful visual references to kitsch culture. In this case, however, cult filmmaker Tinto Brass (Caligula) has only managed to be grating in telling the tale of a French actor named Bernard (Trintignant), who meets pretty Jane (Aulin) by the corpse of a murdered nightclub owner. Bernard knows Jane didn't commit the crime, and he starts to fall in love with her while running around London to the ear-piercing strains of Armando Trovajoli's score and through the wearingly garish production designs of Carmelo Patrono, who was influenced by the lurid comic-book art of Guido Crepax. Brass edits the film with a jackhammer, occasionally switching from color to black-and-white without apparent motive, and the whole thing looks more like a bad acid trip than the sort of Nouvelle Vague thriller for which he was obviously striving, wasting some fairly interesting cinematography by Silvano Tranquilli. Completists will want to look for an uncredited David Prowse as a hoodlum, and will no doubt be entranced by Ewa Aulin in yet another of the garish pop junk-heaps that comprised her career. She followed this one with the disappointing Candy and the demented Microscopic Liquid Subway to Oblivion.