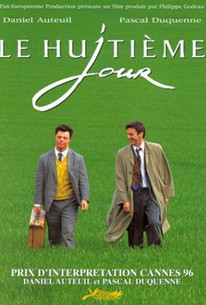 Two men with seemingly nothing in common become unlikely friends in this drama from France. Harry (Daniel Auteuil) is a salesman working for a large but faceless corporation, where he's become a success at the expense of his personal life. His wife Julie (Miou-Miou), frustrated by his lack of concern for his family, has divorced him, and while he still has visitation rights to his children, he manages to forget when it's his weekend with his daughters, and he neglects to pick them up at the train station. Harry is depressed and nearly suicidal; while driving late one rainy night, he accidentally hits a dog who is walking with Georges (Pascal Duquenne), a personable young man with Down's Syndrome. Georges lives in a mental institution, where he's happy and well cared for, but when several of the other patients leave for a weekend visit, Georges decides that he should leave too, and he sets out to visit his mother. Harry can't bring himself to leave Georges behind, so after burying the dog, he offers to drive him to his mother's home, which becomes the start of a complicated odyssey for the two of them, especially after Harry finds out that Georges' mother is no longer alive. Actor Pascal Duquenne actually does have Down's Syndrome; he and co-star Daniel Auteuil shared the Best Actor award at the 1996 Cannes Film Festival.