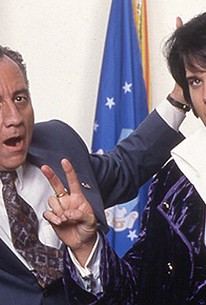 Two of America's great cultural icons meet in this highly amusing comedy (which, as the film reminds us, is based on actual incidents; check out Peter Guralnick's superb Presley biography Careless Love for a more direct recounting of the facts). One evening Elvis Presley (played by Rick Peters) is alone at his mansion, feeling out of sorts, and he gets an idea -- he wants to be named an FBI Agent At Large to do his part in the war on drugs. And how better to achieve this lofty goal than to go to Washington, D.C. and speak with President Richard Nixon (Bob Gunton)? For the first time in years, Elvis leaves the house by himself, hops on a plane, and jets to our nation's capital, determined to get in touch with Mister "I Am Not A Crook" himself. Director Allan Arkush plays this story for all the absurdity its worth, but still hews pretty close to the truth (with several real-life "witnesses" offering their view of the events, including Tony Curtis, Wayne Newton and Dick Cavett) and presenting a convincing argument that Presley and Nixon had a lot more in common than you'd imagine; both title characters come off as cartoonish, but affectionately so, and this ranks with the most likable and sympathetic portraits of Elvis Presley committed to film.

Tony Curtis
as Himself

Wayne Newton
as Himself

Edwin Newman
as Himself

Graham Nash
as Himself

Alex Butterfield
as Himself
View All

There are no featured audience reviews for Elvis Meets Nixon at this time.