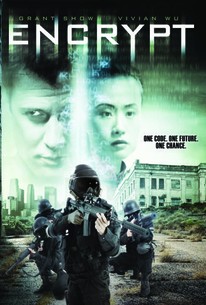 In the year 2068, the Earth's surface is in a cataclysmic upheaval, much of it transformed into wasteland by unstoppable storms (the byproduct, of course, of the destruction of the Ozone Layer). A few hardy souls have dedicated themselves to preserving and protecting what is left of mankind; among these is former Army Captain John Thomas Garth (Grant Show). Approached by Lapierre (Steve Bacic), a former comrade in arms and now in the employ of grasping eco-profiteer Anton Reich (Art Hindle), Garth is made an offer he can't refuse. In exchange for the opportunity to save his father and several other apocalypse survivors, Reich agrees to lead a small team of mercenaries into the near-impenetrable Vincent estate to "liberate" the priceless works of art that had been stored there before civilization collapsed. Accompanied by reconnaissance specialist Fernandez (Naomi Gaskin), sniper King (Matthew G. Taylor), and tech genius Ebershaw (Wayne Ward), Garth must find some way to circumvent Encrypt, the deadly computerized security system surrounding the estate. Other obstacles include the Rook, a human-destroying robot, and Diana (Vivian Wu), the holographic security chief at the estate -- and a double danger because she possesses not only the means of mass destruction, but also a conscience. A two-hour cable movie that has "series pilot" written all over it, Encrypt premiered June 14, 2003, on the Sci-Fi Channel.

There are no critic reviews yet for Encrypt. Keep checking Rotten Tomatoes for updates!

There are no featured audience reviews for Encrypt at this time.