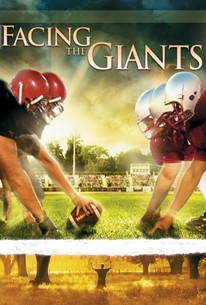 The tropes of both football and evangelical movies are gracelessly on parade in this banal, insipid drama.

A failing high-school football coach finds that in order to succeed he must convince his team that there's more to sports than fame and glory in an inspirational tale of courage on the gridiron and the power of God's word. Grant Taylor (Alex Kendrick) has been coaching the Shiloh Eagles for six years, and he has yet to realize his dream of a winning season. When the team's star player transfers schools, the first three games of the new season show no promise for improvement, troubles at home begin to take their toll, and a plot among the player's fathers to have him fired finds his future in football looking bleak, Coach Taylor is faced with the prospect of either cutting his losses and admitting defeat or turning his life over to God in an attempt to test the true power of faith. With his job on the line and nothing left to lose, Coach Taylor convinces his determined team of underdogs that there's nothing they can't accomplish with a little faith -- including the miracle of a winning season when all hope seems lost. ~ Jason Buchanan, Rovi

Mark Richt
as Himself

News & Interviews for Facing the Giants

Critic Reviews for Facing the Giants

Audience Reviews for Facing the Giants