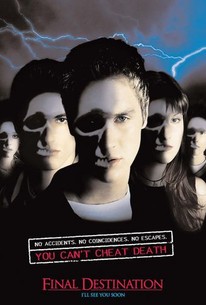 Despite a panel of X-Files' alums at the helm and a promising premise, flighty performances and poor execution keep Final Destination from ever taking off.

Alex Browning, is embarking on a trip to Paris with his high school French class. In the plane's cabin, buckled-in and ready for take-off, Alex experiences a powerful premonition. He sees the plane explode in a fiery blaze moments after leaving the ground. Alex panics and insists that everyone get off the plane. In the melee than ensues, seven people including Alex, are forced to disembark the ill-fated aircraft. Back in the departure lounge, Alex and his friends Billy and Tod; Clear a young woman who instinctively heeded Alex's warning; Carter, whose derision of Alex's paranoia had him and his girlfriend Terry thrown off the plane; and Ms. Lewton, the teacher who volunteers to stay with the disembarking students, all watch as Alex's horrific premonition proves tragically accurate when the plane explodes in a catastrophic fireball. Ironically, even though Alex's intuition saves lives, after the crash he is plagued by both guilt and suspicion. Ominous portents of doom as well as the FBI, dog his every step. Alex comes to believe that somehow, he and the other survivors have briefly cheated death, but will not be able to evade their fate for very long. Clear befriends Alex, but no one, not even she, really believes his macabre theory -- not even as one by one, these fugitives from fate fall victim to the grim reaper.