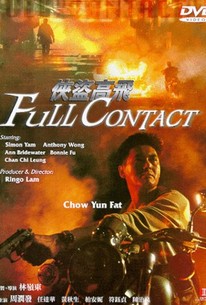 Another entry into the "cheer for the most likeable bad guy" series of Hong Kong action flicks, Full Contact tells the oft-told tale of betrayal and revenge, but serves it up as a potent cocktail of Western convention mixed with the trademarked Hong Kong style. When Jeff's (Hong Kong superstar Chow Yun Fat in true hard-case form) friend Sam (Anthony Wong) steps on the feet of a local loan shark, Jeff comes to his rescue, creating a powerful enemy in the vengeful gangster. Seeking to skip town and make good, the two hatch a plan to hijack an arms shipment with the help of Sam's flamboyant and malicious cousin Judge (a delightfully sleazy Simon Yam) and his gang of dysfunctional thugs. What Jeff doesn't know is that he's being double-crossed by the wild group of brutal killers, who plan to bury him as they make their getaway. Judge forces Sam to off his loyal friend Jeff, but Sam botches the job, leaving Jeff to return for bitter revenge after dealing with an emotionally painful betrayal and a physically challenging rehabilitation. Director Ringo Lam foregoes the melodrama of Hong Kong counterpart John Woo and goes straight for the jugular with unremittingly stark and graphic violence. At the same time, the characters retain a certain amount of sympathy, keeping their relationships and reactions realistic and identifiable. ~ Jason Buchanan, Rovi

Chris Lee
as Chung
View All