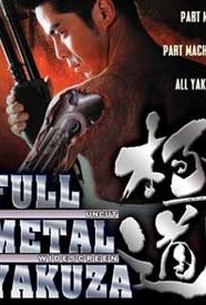 Japanese horror auteur Takashi Miike directed this bizarre, ultra-violent variation on Robocop. Kensuke Hagane (Tsuyoshi Ujiki) works as a janitor for Tousa, the head of a powerful Yakuza family; Kensuke looks up to Tousa, and wants to join the organization some day. While Tousa is serving seven years in prison, Kensuke is given his chance, but he lacks the courage to do much more than the most menial tasks. Things change, however, when Kensuke is driving Tousa home after his stay in prison is over; the pair are ambushed by enemy gangsters, leading to a vicious gun battle in which Kensuke is mutilated and Tousa is killed. They're rescued by Hiraga Genpaku, a crazed medical genius who rebuilds Kensuke using parts of Tousa's body as well as the latest in bionic technology. Now possessing super-human powers as well as Tousa's impressive physical strength, Kensuke is transformed into a super-Yakuza who sets out to take down the men who killed Tousa and nearly cost him his life. Full Metal Gokudo was originally released direct to video in Japan but won a theatrical release and a cult following elsewhere. ~ Mark Deming, Rovi

There are no featured audience reviews for Full Metal Gokudô (Full Metal Yakuza) at this time.