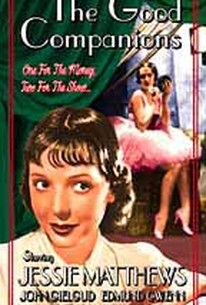 Based on a novel by J. B. Priestley, this British musical-comedy follows an unlikely trio as they try to revive the fortunes of a floundering touring theatrical troupe. Inigo Jolifant (John Gielgud) is a schoolteacher with a talent for songwriting, and Jess Oakroyd (Edmund Gwenn) is a man with theatrical ambitions who has just lot his job. Together, they persuade Miss Trant (Mary Glynne), an older single woman looking for adventure, to back them as they try to bring "The Dinky Do's" back into the spotlight. Susie Dean (Jessie Matthews) is a chorus girl who dreams of stardom, and when she's made the new leader of the show, it looks as if her dreams may finally become a reality. The Good Companions is buoyed by the superb singing and dancing talents of Matthews, who was considered one of the screen's greatest musical stars in England and Europe, though she inexplicably never achieved the same fame in the United States; Gielgud also got a rare opportunity to display his vocal abilities in this film. Keep your eyes peeled for Jack Hawkins and horror film great George Zucco, who both appear in supporting roles. ~ Mark Deming, Rovi

There are no critic reviews yet for Good Companions. Keep checking Rotten Tomatoes for updates!

There are no featured audience reviews for Good Companions at this time.