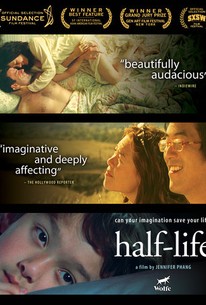 As time starts spinning faster and a series of natural disasters send the world plunging into chaos, the disillusioned, self-absorbed suburbanites nestled comfortably in the hills of Northern California find their lives unraveling at an alarming rate. Global cataclysms are on the rise, and the air quality around the world is at an all-time low, and as the pressure begins to build up in the mind of suburban single mother Saura Wu, a sinister charmer appears and disrupts her efforts to rebuild her family. Meanwhile, across town, a troubled girl named Pam seeks comfort in the arms of affable young hipster Scott. But while Scott is more than willing to be a good friend to Pam, he's just now coming to terms with his identity as a gay man - a reality his fundamentalist parents refuse to accept. Now, as a series of disastrous supernormal continue to unfold, Saura's son Timothy realizes that he has been gifted with paranormal powers, which he quickly learns how to develop and hone. By drawing on his unique powers, Timothy is somehow able to alter everyone's reality - but what good can this do in a world overcome by misery and catastrophe? First time feature filmmaker Jennifer Phang crafts an apocalyptic fable that takes a philosophical look at the end of the world, and shows how sometimes hope can still manage to cut through fatalism with extraordinary results. .

Ben Redgrave
as Wendell
View All

There are no featured audience reviews for Half-Life at this time.