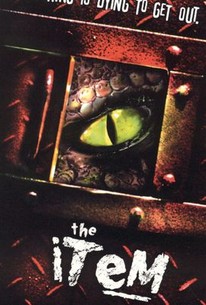 The most interesting films are those that bend a classic genre. Twisting several genres in all directions at once, The Item is a hybrid psychological thriller cum horror film cum sci-fi camp extravaganza. Four felons are guaranteed a bundle of money just to baby-sit/guard a high-tech box until delivery the next morning. In this box is something very bizarre. This thing-this "item" which resembles a forty-pound worm-looks harmless when harnessed into its container, but it possesses the peculiar power to look into hearts and harvest truth. It exploits its victims' every repressed weirdness and lurking subconscious fear to its own advantage. With the clock ticking and tension rising and way-too-many loaded guns in the room, this get-rich-quick scheme turns into an adolescent fantasy of bloody mayhem and murder. Where Hollywood has gone astray spending millions to make a monster look "real," this modestly budgeted film becomes vibrant through its writing and style. The item may be smaller than Godzilla, but it is much more complex and horrifying. Director Dan Clark takes delight in the details, both physical and mental, of this motley group of degenerates. When blood flows, which it does often, it splatters the wall in gallons. Shot in digital beta format, The Item is a striking example of the possibilities of this new medium in the hands of good actors and a creative storyteller. Whether perceived as a dark fable or greed-driven morality tale, the filmmaker's own description may be the best: "The Item is a modern art-exploitation film."

Kyle B. Cunningham
as Joseph
View All

Critic Reviews for The Item

Audience Reviews for The Item

There are no featured audience reviews for The Item at this time.