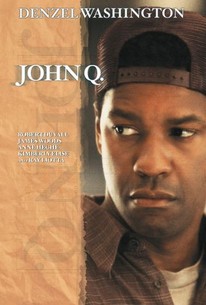 Washington's performance rises above the material, but John Q pounds the audience over the head with its message.

A national health care crisis in the United States yields this tense drama from screenwriter James Kearns and director Nick Cassavetes, who experienced a real-life dilemma with his daughter's congenital heart disease that mirrors the one in this film. Denzel Washington stars as John Q. Archibald, a factory worker facing financial hardship as a result of reduced hours in his workplace. When his young son, Michael (Daniel E. Smith), is stricken during a baseball game, John and his wife, Denise (Kimberly Elise), discover that their child is in need of an emergency heart transplant. Although the Archibalds have health insurance, they are informed by hospital administrator Rebecca Payne (Anne Heche) that their policy doesn't cover such an expensive procedure. Unable to raise the money himself, John persuades the hospital's compassionate cardiac surgeon, Dr. Raymond Turner (James Woods), to waive his lofty fee, but is still left with too much of a financial burden to bear. With no recourse but to take his son home to die, John snaps and holds the staff and patients of the hospital's emergency room hostage at gunpoint. John is soon a media hero, the focus of intense news coverage, even as police chief Gus Monroe (Ray Liotta) and hostage negotiator Frank Grimes (Robert Duvall) try to resolve the situation before it leads to bloodshed. ~ Karl Williams, Rovi

Keram Malicki-Sánchez
as Freddy B.