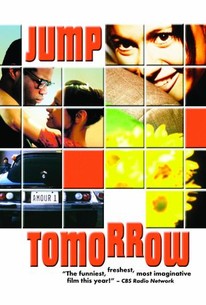 The light-hearted romantic comedy Jump Tomorrow charms with its whimsy and sweetness.

A lovelorn matchmaker tries to set up two people about to be married -- but not to each other -- in this independent romantic comedy. George (Tunde Adebimpe) is a Nigerian expatriate living in upstate New York, where he has pledged to marry a woman in a marriage arranged for him in childhood, though he's not especially enthusiastic about the idea. George goes to Buffalo to pick up his fiancée as she arrives in America, only to discover she's already moved on to Niagara Falls, where the wedding will be held in three days. On his way back home, an annoyed and downcast George meets Gerard (Hippolyte Girardot), a man from France who is wallowing in sorrow after being dumped by his girlfriend, and Alicia (Natalia Verbeke), a light-hearted Latin-American woman who is due to marry her fiancé Nathan (James Wilby) in less than a week. Alicia finds George amusing but thinks he needs to loosen up a bit, so she invites him to a party; George brings Gerard along, feeling he needs some cheering up, and Gerard notices an obvious attraction between Alicia and George. Gerard fancies himself an authority on matters of the heart, and is certain George and Alicia would rather be with each other than with the people they're engaged to marry, so joining George, Alicia, and Nathan for a trip to visit Alicia's parents en route to Niagara Falls, he hatches a plan to break Alicia and Nathan apart -- and bring Alicia and George together. Jump Tomorrow was shown in competition at the 2001 Sundance Film Festival.

Amy Sedaris
as Other Student in Class

Deen Badarou
as Priest
View All