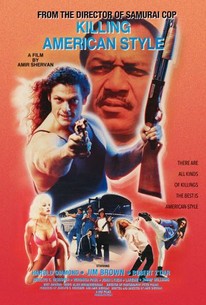 A violent pair of convicted bank robbers stages a daring prison break, but meets their match in the form of a true American hero who will fight to the death for the sake of his family. Written and directed by Amir Shervan (Samurai Cop, Hollywood Cop), Killing American Style stars (Robert Z'Dar) (Maniac Cop) as Tony and John Lynch as Lynch, two ruthless gangsters who pull off a daring heist, and lead the police on a wild chase. When the bullets start to fly, Tony's brother Jesse (Alexander Verdin) is badly wounded. Later, after taking hostages, the gang holes up in a sprawling estate, dispatching courageous John Morgan (Harold Diamond) on a mission to find a doctor for Jesse. Meanwhile, convinced that Tony and Lynch are fully prepared to execute his family once the job is done, John vows to take down the thieves by any means necessary.

There are no critic reviews yet for Killing American Style. Keep checking Rotten Tomatoes for updates!

There are no featured audience reviews for Killing American Style at this time.