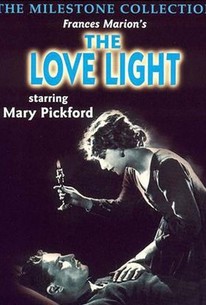 A visually stunning if somewhat overblown melodrama, The Love Light was directed by Mary Pickford's close friend and confidante, screenwriter Frances Marion. Pickford is Angela, a young Italian lighthouse keeper who can only watch while both her brothers (Jean De Briac and Eddie Phillips) and a village admirer, Giovanni (Raymond Bloomer), go off to war with Germany. While mourning the news of the older brother's death, Angela rescues a stranger who has washed up on the beach. Dressed in an unfamiliar sailor's uniform, the boy (Fred Thomson) introduces himself as Joseph, an American whose ship had left him behind. Fearing that he may be mistaken for a deserter, Angela agrees to harbor the young man and they quickly fall in love, Angela sending her secret husband signs of love every night from the lighthouse. When Angela discovers that Joseph is a German spy, and that the nightly messages of love may have caused the drowning death of her returning younger brother, she gives him up to the angry villagers. Grieving over her dead brothers and the treachery of the man she loved, Angela finds comfort only in her newborn baby. But Maria (Evelyn Dumo), who has lost both her husband Pietro (Albert Prisco) and their newborn son, convinces the local nuns to hand over Angela's child to her. When Angela realizes what has happened, Maria flees in a boat operated by Tony (George Regas). In the ensuing storm, Angela's baby almost drowns but the little girl is saved in the nick of time by her mother's "love light." Reunited with a blinded Giovanni, Angela and her baby have finally found a safe harbor.

Critic Reviews for The Love Light

Audience Reviews for The Love Light