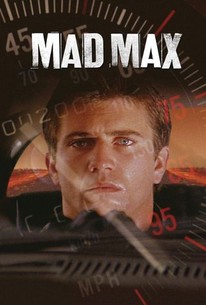 This stunning, post-apocalyptic action thriller from director George Miller stars Mel Gibson as Max Rockatansky, a policeman in the near future who is tired of his job. Since the apocalypse, the lengthy, desolate stretches of highway in the Australian outback have become bloodstained battlegrounds. Max has seen too many innocents and fellow officers murdered by the bomb's savage offspring, bestial marauding bikers for whom killing, rape, and looting is a way of life. He just wants to retire and spend time with his wife and son but lets his boss talk him into taking a peaceful vacation and he starts to reconsider. Then his world is shattered as a gang led by the evil Toecutter (Hugh Keays-Byrne) murders his family in retaliation for the death of one of its members. Dead inside, Max straps on his helmet and climbs into a souped-up V8 racing machine to seek his bloody revenge. Despite an obviously low budget and a plot reminiscent of many spaghetti Westerns, Mad Max is tremendously exciting, thanks to some of the most spectacular road stunts ever put on film. Cinematographer David Eggby and stunt coordinator Grant Page did some of their best work under Miller's direction and crafted a gritty, gripping thrill ride which spawned two sequels, numerous imitations, and made Mel Gibson an international star. One sequence, in which a man is chained to a car and must cut off a limb before the machine explodes is one of the most tense scenes of the decade. The American version dubbed all the voices -- including Gibson's -- in a particularly cartoonish manner. Trivia buffs should note that Max's car is a 1973 Ford Falcon GT Coupe with a 300 bhp 351C V8 engine, customized with the front end of a Ford Fairmont and other modifications. ~ Robert Firsching, Rovi

Tim Burns
as Johnny the Boy

Sheila Florance
as May Swaisey

Sheila Florence
as May Swaisey

Kim Sullivan
as Girl in Chevy
View All