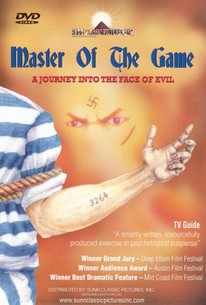 Master of the Game

Master of the Game Photos

A prisoner plays a dangerous game with his captors in this psychological drama set during World War II. In 1945, the war in Europe is in its final innings as Nazi Germany stands on the verge of collapse. Four soldiers escape from a concentration camp only to seek refuge in a cabin that's a temporary home to four officers of the Third Reich on the run from Allied forces. Wolfgang interrogates the escapees and executes three of them, sparing the fourth because he had the discipline and presence of mind to only give his serial number, 3264 (Uygar Aktan). Wolfgang and his compatriots, Keppler (David Stokey), Raster (Garry Peters), and Roder (Alex Affolter), learn that 3264 was a published author before the war, and they demand he entertain them with a story. 3264 instead proposes they play a game in which he will play the role of Nazi officer while the Germans pose as Jews; 3264 will then, by using logic and psychology, prove his own superiority over his captors. Uygar Aktan, who plays 3264, also wrote the screenplay for this film, which was shot independently in Texas.

Klaus Christian
as Shooter
View All

Critic Reviews for Master of the Game

Audience Reviews for Master of the Game

There are no featured audience reviews for Master of the Game at this time.

Master of the Game Quotes