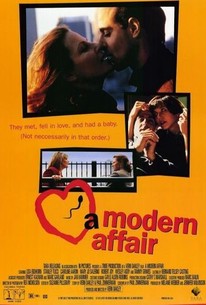 Most people fall in love and then have a baby, but one woman finds herself reversing the process in this romantic comedy. Grace Rhodes (Lisa Eichhorn) is a businesswoman inching into her 40s who has reached most of her career goals, but she is having a little trouble with her biological clock, which has started ticking very, very loudly. Grace hasn't had much luck in finding Mr. Right, and her friend Elaine (Caroline Aaron), who manages the not inconsiderable feat of being even more cynical about such matters than Grace, assures her that the man of her dreams doesn't really exist. Elaine is the first to suggest to Grace that if she wants a child and can't find a man, perhaps she should consider visiting a sperm bank. In time, Grace warms to the idea and eventually chooses sample #247. Grace becomes pregnant, and is very happy...until she starts wondering what sort of man her child's father really is. With Elaine's help, Grace cracks into the sperm bank's records and learns that #247 belongs to Peter Kessler (Stanley Tucci), a gifted but lonely photographer with serious commitment issues. Elaine meets Peter at the gallery he runs, and before long, a cautious romance begins to blossom between them, but Elaine isn't sure if this relationship is destined to last -- or when or if she should tell Peter that she's carrying his child. A Modern Affair was produced, directed, and written by Vern Oakley; it was his first feature film.

Jon Huberth
as Suit No. 1

Vern Oakley
as Man with Baby
View All

Critic Reviews for A Modern Affair

Audience Reviews for A Modern Affair