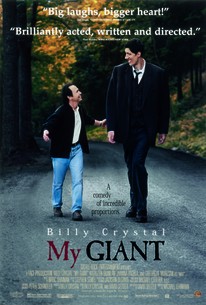 Third-rate talent agent Sammy Kanin (Billy Crystal) is more devoted to his career than his wife Serena (Kathleen Quinlan) and son Nick (Zane Carney), so instead of going to Nick's birthday party, he chooses to travel to Romania where his teen client Justin Allen (Rider Strong) is acting in a period adventure movie. When Sammy's auto swerves off the road, he wakes up in a monastery, having been removed from the wreckage by sensitive, Shakespeare-quoting, 7'7"-tall giant, Max (pro basketball player Gheorghe Muresan), a ward of the monks who works as a monastery caretaker. Sammy sees Max as his ticket to the top, gets him a warrior role in the adventure movie, and takes him back to the U.S. where Max hopes to win back a long-ago girlfriend Lillianna (Joanna Pacula), living in Gallup, New Mexico. Sammy and Max head for Vegas, where actor Steven Seagal (as himself) is shooting a film with a villain role perfect for Max. When Sammy contacts Lillianna, she expresses disinterest in Max, forcing Sammy to seek a solution that can bring the two together.

Steven Seagal
as Himself

Tony Belton
as Man on Street

David Steinberg
as Himself

Michael Papajohn
as Tough Guy No. 1

Lincoln Simonds
as Tough Guy No. 2

Miroslava Baburkova
as Peasant Woman No. 1

Zoja Oubramova
as Peasant Woman No. 2

News & Interviews for My Giant

Bay Talks About His "Transformer" Toys
"So" It Has a Good Cast!
View All

Critic Reviews for My Giant

Audience Reviews for My Giant