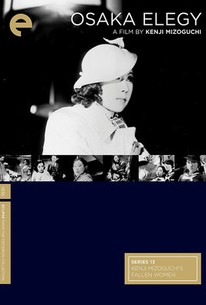 This is one of director Kenji Mizoguchi's first true masterworks in his long, highly celebrated career. Ayako, a young switchboard operator, tries to resist the advances of Asai, the owner of the pharmaceutical company where she works. Her love interest Nishmura, a young executive at the same company, does not seemed bothered, and her drunken father, who is up to his eyes in debt, is even less helpful. After a loud argument, her father throws her out of the house. With nowhere else to go, Ayako becomes Asai's mistress. She tries to pay her drunken father's numerous debts and help her brother Hiroshi with his studies. They eagerly accept the money but instead of gratitude, they demand more. Thanks to a comical mix-up at a doctor's office, Asai's wife finds out and the affair comes to an abrupt end. Yet thanks to her father's drinking, her family's financial situation seems as pressing as ever, which all but forces Ayako into prostitution. Unfortunately, the police catch her in the act. Even though her father and brother have been living off her, they brand Ayako a disgrace and cast her out of the house to face an uncertain future. ~ Jonathan Crow, Rovi