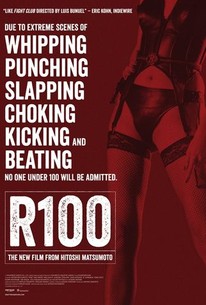 R100 definitely isn't for everyone, but audiences open to writer-director Hitoshi Matsumoto's fetish-driven thrills will find it a suitably perverse pleasure to watch.

Nao Ohmori (star of Takashi Miike's Ichi the Killer) plays Takafumi Katayama, a mildmannered father who escapes the pressures of daily life by joining a mysterious S&M club, where the so-called Queens visit clients in real-life settings. While at first the rough treatment and humiliation he receives from leather-clad women in cafés and restaurants is enjoyable, Takafumi soon realizes that he's opened a door that cannot be closed. Unable to end his relationship with the club, he finds himself pursued by a gang of ruthless dominatrices, each with a very unique talent. Takafumi must either find a way to turn the tables, or walk even further down this dark yet sexy path. A massive star in Japan, where he is best known for his zany television comedies, director Hitoshi Matsumoto has bewildered and delighted Midnight Madness audiences twice before, with Big Man Japan and Symbol, each time one-upping himself in terms of both strangeness and imagination. With R100, he returns with a distinctive take on the sex comedy. The title is itself a play on the Japanese movie ratings R-15 and R-18, and represents just how far Matsumoto is willing to go to slap, tickle, and lead his audiences into a world that is unlike anything they have ever experienced! (c) Drafthouse

New on DVD & Blu-Ray: The Hunger Games, Night at the Museum, and More
View All

There are no featured audience reviews for R100 at this time.