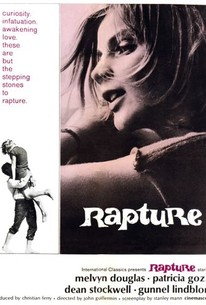 Raised in the country with only her world-weary, cynical father, a former judge, for company, a young woman grows up believing that she too is angry at the world. Other than her reclusive father, her only human contact comes from her personal maid and a scarecrow that the girl mistakenly believes has come to life. Her life abruptly changes one day when a fugitive criminal shows up and begs the judge for shelter. Hating all things having to do with the law, the old man lets him in. The young woman is enchanted by the fugitive's presence and grows close to him until she discovers that he and the maid have become lovers. The enraged young woman vows to kill the maid, but the latter hastily leaves. With no hindrance, the girl and the fugitive fall in love and head for Paris where the girl learns valuable lessons about herself and tragedy ensues.

Ellen Pollock
as Landlady
View All

There are no critic reviews yet for Rapture. Keep checking Rotten Tomatoes for updates!

There are no featured audience reviews for Rapture at this time.