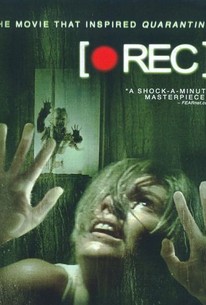 Plunging viewers into the nightmarish hellscape of an apartment complex under siege, [Rec] proves that found footage can still be used as an effective delivery mechanism for sparse, economic horror.

After teaming up in 2002 for the dramatic music documentary OT: The Movie, Spanish horror specialists Jaume Balagueró (Darkness) and Paco Plaza (Second Name) join forces once again for this experimental frightener about a mysterious outbreak in an old tenement building. Reporter Angela (Manuela Velasco) and her trusty cameraman Pablo are following a local fire crew for a segment of their reality television series "When You're Asleep" when the firefighters receive a distress call from a nearby apartment building. An elderly woman has become locked in her apartment; a routine call by any account. The police are already on the scene, so now it's up to firemen Manu (Ferran Terraza) and Alex (David Vert) to break down the door and ensure that no harm has come to her. Upon arriving at the building, everything appears normal. But the calm atmosphere at the moment betrays the horrors that begin to unfold after the firemen break down the tenant's door and experience something that no one would believe had it not been captured on camera. Later, as the building is surrounded and quarantined, Pablo continues to roll tape to ensure that whatever the outcome of this terrifying situation may be, there will be some evidence to ensure that the truth gets out.