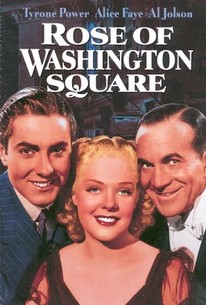 This barely-disguised portrait of singer Fanny Brice led to Brice's lawsuit against 20th Century Fox for defamation of character, a case which was settled out of court. Alice Faye plays Rose Sargent, a New York singer of the 1920s who falls for handsome, cocky wheeler-dealer Bart Clinton (Tyrone Power in a role patterned on Brice's troubled real-life paramour Nicky Arnstein). Rose's new romance is much to the dismay of her pal and former partner Ted Cotter (Al Jolson), who doesn't trust the slick, smooth-talking Bart. Eventually, Rose and Bart marry, but as the entertainment careers of Rose and Ted take off, Bart's tendency to get over his head in get-rich-quick schemes evolves into a bona fide criminal career. Rose finally makes the big time, becoming a popular star with the Ziegfeld Follies, and Bart skips town in order to preserve her reputation. However, Bart is nabbed by the authorities and sentenced to five years in jail. Despite the public scandal, Rose and Bart's devotion remained undiminished. Songs include the classics "California, Here I Come", "Toot Toot Tootsie Goodbye", "I'm Just Wild About Harry" and the perhaps unwise inclusion of "Funny Lady" Brice's signature song, "My Man".

Louis Prima
as Himself

Chick Chandler
as Master of Ceremonies

Horace McMahon
as Irving
View All