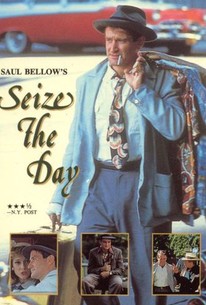 The PBS series Great Performances first presented the made-for-TV feature Seize the Day. The time is the success-driven '50s; Robin Williams plays Tommy Wilhelm, a middle-ager who has just lost his salesman's job. Margaret, his wife (Katherine Borowitz), is on the verge of divorce and fully intends to take him to the cleaners whether he has an income or not. Doctor Adler (Joseph Wiseman), Tommy's judgmental father, cannot abide having a failure in the family and refuses to lend his son a single penny. In desperation, Tommy heads to New York City, where his old wheeler-dealer pal Dr. Tamkin (Jerry Stiller) has promised him a job. Even there, however, Tommy is defeated by the cold-shoulder treatment afforded him by the people whose opinions he values most. Seize the Day was adapted by Ronald Ribman from the novel by Saul Bellow.

Richard B. Shull
as Rojax

Saul Bellow
as Man in Hall

Paula Trueman
as Woman No. 1

Mildred Clinton
as Woman No. 2

Robertson Carricart
as Trader No. 1

Joe Sharkey
as Trader No. 2

Kent Broadhurst
as Trader No. 3

Eileen Heckart
as Funeral Woman No. 1

Elizabeth Perry
as Funeral Woman No. 2

Critic Reviews for Seize the Day

Audience Reviews for Seize the Day