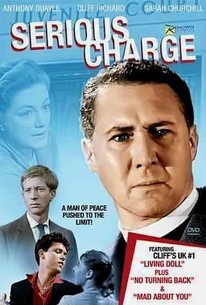 A false accusation divides a town and destroys a clergyman's career in this adaptation of the Philip King stage play of the same name. Anthony Quayle stars as Reverend Howard Phillips, a new arrival in a small town that's become overrun with punk kids. Trying to make a difference and improve the town's fortunes, Phillips earns the respect and love of Hester Peters (Sarah Churchill), a spinster and the daughter of the previous vicar. Unfortunately, Phillips runs afoul of Larry Thompson (Andrew Ray), leader of the delinquents running roughshod over the town. A nasty piece of work, Thompson has murdered one person and doesn't hesitate to concoct a false story that Phillips made an unwelcome homosexual advance toward him that turned into an assault. Instead of rallying to his defense, the narrow-minded town elders simply backbite and gossip. Director Terence Young went on to direct three of the first four James Bond films, Dr. No (1962), From Russia with Love (1963), and Thunderball (1965). ~ Karl Williams, Rovi

There are no critic reviews yet for Serious Charge. Keep checking Rotten Tomatoes for updates!

There are no featured audience reviews for Serious Charge at this time.