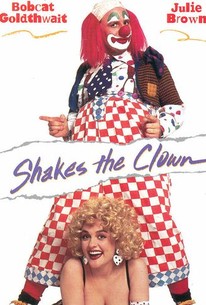 Shakes the Clown has a handful of memorable moments, but they're scattered in a movie whose best ideas were left undeveloped on their way to the screen.

This black comedy chronicles the fall of one of the world's most unlovable clowns as he plies his trade and tries to survive in Palukaville a town where everyone is more or less a Bozo. Shakes loves women and more than that, he loves his booze. Like many of his painted peers, ol' Shakes likes to hang out at The Twisted Balloon, the favorite local pub where he hoists a few, beats up on mimes (the lowest caste in Palukaville) and causes trouble with his girl friend Judy, a woman who cannot say the letter "L." Because the slovenly Shakes can't seem to make it to birthday parties sober and on time, he is fired from his booking agency, causing him to go on a big drinking binge. Later, Shakes awakens and learns that Binky, a lousy TV-clown, is framing him for beating up Shake's former boss with a juggling pin. Now poor Shakes must clear his name. He must also rescue "Juwee" who has been kidnapped by the nefarious Binky, and he must come to grips with his alcohol problem (perhaps the film could be therefore titled "Clown and Sober?"). Keep an eye peeled for cameos by Robin Williams, as a mime instructor, and Florence Henderson as one of Shake's illicit sexual conquests.

Bobcat Goldthwait
as Shakes The Clown

Blake Clark
as Stenchy the Clown

Paul Kozlowski
as HoHo the Clown

Sydney Lassick
as Peppy the Clown

Danielle Spencer
as Boots the Clown

Cary Smith
as Mom at Party

Dan Spencer
as Boots the Clown

Sidney Lassick
as Peppy the Clown

Tom Villard
as Dirthead in Car

News & Interviews for Shakes the Clown

Critic Reviews for Shakes the Clown

Audience Reviews for Shakes the Clown