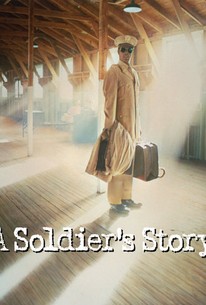 A meticulously-crafted murder mystery with incisive observations about race in America, A Soldier's Story benefits from a roundly excellent ensemble and Charles Fuller's politically urgent screenplay.

Inspired by the Herman Melville novel Billy Budd, writer Charles Fuller created the Pulitzer Prize-winning A Soldier's Play, which he then adapted into this film drama in 1984, for socially conscious, liberal director Norman Jewison. In the racially-divided 1940s, Fort Neal, Louisiana, is a military base where black soldiers are sent not to fight in WWII but to play baseball against other armed forces teams. The murder of a black sergeant, Waters (Adolph Caesar) brings an investigator, Captain Davenport (Howard E. Rollins, Jr.) to the base. Davenport, the first black officer that most of the men have ever met, suspects that a pair of white men were responsible for Waters' death, but his probe reveals that nearly everyone, regardless of skin color, had ample reason to kill the loathsome but pitiable Waters. The cast of A Soldier's Story features early supporting performances from several African-American actors who would go on to greater prominence, including Denzel Washington, David Alan Grier, and Robert Townsend. The film was nominated for three Oscars: Best Picture, Best Supporting Actor (Caesar) and Best Adapted Screenplay.

News & Interviews for A Soldier's Story

Critic Reviews for A Soldier's Story

Audience Reviews for A Soldier's Story