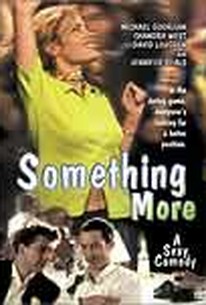 In this romantic comedy, two guys who've discovered Age 30 in their rear-view mirror try to unravel the mysteries of life and love in beautiful Saskatchewan. Sam (Michael Goorjian) is a guy in his late 20s who is looking for the woman of his dreams but isn't having much luck. His best friend Jim (David Lovgren) isn't nearly as fussy as Sam; he'll take a chance on any woman that seems moderately attractive, especially ones that Sam has expressed an interest in. Sam likes to pass himself off as a moody intellectual, but this act doesn't get him very far with Kelly (Chandra West), an insurance investigator who seems a bit flaky on the surface but soon works her way into Sam's heart. However, Jim, true to form, has to make a play for her as well. Jennifer Beals appears in a supporting role as a waitress who gives Sam lessons in how to sound deep and pretentious. Something More was shot in 1997, but it didn't emerge from the editing room until 1999 for its initial Canadian release. ~ Mark Deming, Rovi

Michael A. Goorjian
as Sam

Kurt Max Runte
as Will

Critic Reviews for Something More

Audience Reviews for Something More