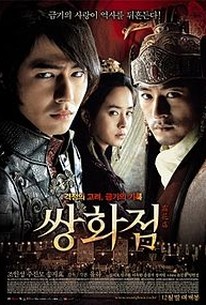 Director Yoo Ha helms the period saga A Frozen Flower as a plunge into the intrigues and machinations of the Korean dynastic era. The period is the late 14th century, and the last waning gasp of the centuries-old Goryeo Dynasty. As that regime comes to a bitter end thanks to the machinations of the Yuan Dynasty, The Goryeo king responds by organizing a military force known as Kunryongwe, led by the daunting commander Hong Lim. The leader captivates the king to an alarming degree - to such an extent, in fact, that he almost completely diverts the regent's attention away from his queen, leaving her with tremendous feelings of reluctance and hesitancy about this relationship. Meanwhile, the manipulativeness of the Yuan doubles: they unsuccessfully attempt to subvert the king by placing a threatening ruler in a high position, but the king - sensing this Machiavellian scheme - adamantly refuses, much to the consternation of the top-tiered Goryeo officials. The ruler also devises a complex and wickedly clever scheme to protect the Goryeo line for future generations by appointing Hong Lim to impregnate the queen and father a new ruler with her. ~ Nathan Southern, Rovi

There are no critic reviews yet for Ssang-hwa-jeom (A Frozen Flower). Keep checking Rotten Tomatoes for updates!