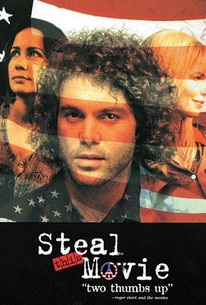 D'Onofrio's performance fails to do justice to Hoffman, and the depiction of the 60s also rings false.

Steal This Movie! is a dramatic account of the tumultuous life and times of Abbie Hoffman, one of the most visible and influential figures of America's 1960s counter-culture. (Its title was inspired by Hoffman's irreverent "survival guide," Steal This Book.) Hoffman's founding of the Youth International Party (better known as the "Yippies") and inventive acts of street theater -- including an "exorcism" of the Pentagon and the riotous protests at the 1968 Democratic Convention in Chicago -- made him a household name and a star of the anti-war movement. They also earned him enemies, and he was eventually arrested for trying to sell cocaine to an undercover cop, a bust that he contended was a set-up meant to discredit him. Rather than face a long prison sentence, Hoffman went underground, leaving behind his wife and children and posing as "Barry Freed," who became a respected environmental activist. In time, Freed acknowledged that he was Hoffman, spent two months in jail, and returned to activism full-time until his 1989 death. Steal This Movie stars Vincent D'Onofrio as Hoffman, Janeane Garofalo as his wife Anita, Kevin Corrigan as Jerry Rubin, Troy Garity as Tom Hayden, and Jeanne Tripplehorn as Joanna Lawrenson, who became romantically involved with Barry Freed.

Michael Cera
as america (ages 7 and 8)

Critic Reviews for Steal This Movie

Audience Reviews for Steal This Movie